The goal of this work package is to determine the best modularization concept for various battery applications in a high volume production and put this concept in component development. With this modular component set various applications for batteries in e-mobility (EV – Hybrid – 48V) have to be addressed. The modular concept is optimized regarding over life safety and remanufacturing and recycling aspects. 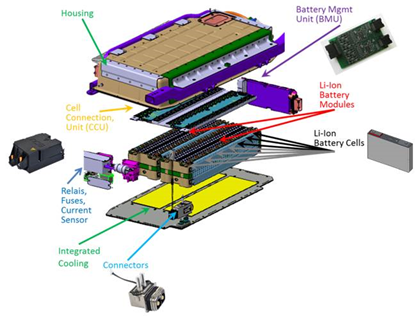 Electric vehicles are still more expensive than comparable conventional vehicles. One of the main cost drivers in an electric car is the battery system. An approach to reduce that costs is standardization of components, so a mass production could leverage the economies of scale. But with mass production the requirement of an ecological friendly product lifecycle rises. Therefore the goal of work-package 3 is to find a modularization potential for automotive battery components in order to reduce costs, including considerations for eco-design and 2nd life usage of the battery.

Starting point for the work in WP3 was the VECEPT battery system. A Samsung SDI expert group analyzed main component per component regarding its standardization potential and developed a ranking system with three categories:

As illustrated in Figure 2 the main standardization potential can be identified for the electronic components. Those components have the same purpose in almost every battery system: Collecting temperature and voltage data and then calculating state of charge and health of the system.

One of the main cost drivers for the battery system itself are the battery cells, therefore they are identified as the key to a modularized battery concept. Although there are a lot of different cell formats available (prismatic, round, pouch in different sizes), there is a first approach by the VDA to standardize the prismatic format for automotive usage. The idea is to use those standardized format cells to build up standardized stand-alone modules, so they can be further chained up to a scalable battery system. The next step in eMPROVE is to determine a battery design using those standardized modules. 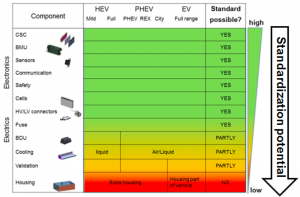 Besides the easy to standardize parts there were also components identified that are partly usable for standardization, like the cooling system.

At last one component was identified that has almost no standardization potential: The battery housing. It is an integrated part of the vehicle and therefore always tailored to the available design space and requirements of the manufacturer.

After determining the standardization potential requirements for the demonstrator were developed. As already mentioned also eco-design and 2nd life will be considered in the battery design. The main resulting requirement is that the design has to use technologies that enable an easy disassembling.

Another approach to raise efficiency of a battery system could be to implement a thermal active housing, which could have a positive effect especially on EVs in cold conditions. Therefore in cooperation with work-package 5 different design options were evaluated and requirements for the eMPROVE system were derived.

Summarized Samsung SDI was able to identify with their partners several design specifications that will make future batteries more efficient with a lower price per kWh, covering life-cycle considerations. The next step of the project is now to implement those requirements in an EV battery design.