The goal of this WP is to support the project innovatively in order to improve the entire vehicle efficiency and also the lifetime of storage and energy systems on component and vehicle level, including the requirements for mass producibility. To do so, different new technologies will be developed and demonstrated in different work packages.

In detail, three (3) different research approaches will be investigated: 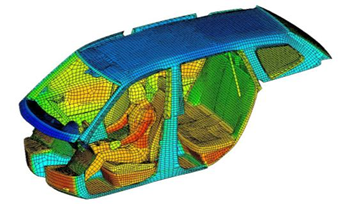 Research focus 1 deals with establishing thermal comfort while using infrared radiation. The main idea behind this topic is to change the main heat transfer mechanism inside the vehicle from convection to radiation, which has several positive impacts. To do so, different areas inside the vehicle have been declared to be radiation areas at a temperature of about 60°C. The energy needed for powering these areas was taken from the air, resulting in the air being less warm than before. But even while using less warm than before it could have been shown, that thermal comfort inside the vehicle can be reached faster and consumes less energy than doing it in a classical way. During these investigations different numerical methods have been coupled together in order to get the entire picture represented by the thermal comfort a human would feel in certain environments. Figure 5 shows the difference between classical heating (left side) and radiation heating (right side) in the same car.

Research focus 2 tries to answer a very interesting question: will it be possible to save energy if the automatic transmission fluid (ATF) will be heated up prior to vehicle operation? Cold ATF is doughy compared to warm. This results in high friction losses produced by the gears itself but also by the bearings of the axels. Normal ATF needs about 15 minutes to heat up to normal temperature. During this time, high friction losses are produced resulting in a higher energy consumption compared to the same situation with warm ATF. Using electric cars in an all-day scenario will result in driving short distances like going to work or to shopping places or to similar destinations. This means, that using an electric car this way during cold seasons will produce energy losses due to cold ATF. Furthermore, driving such distances will never heat up the ATF properly, as no heating unit is available for problems like this. So, during the first period of the project, it was investigated, how big the impact of a preconditioning system for the ATF will be. To do so, the efficiency of a standard gear system was compared with the same gear system featuring a heating concept for the ATF. With these analysis it could have been shown, that there is a huge energy saving potential when a heating system heats up the ATF once the vehicle starts moving. Figure 6 shows, that the efficiency of the gear system is at its maximum already 3 minutes after the vehicle was taken in operation. Normally it takes about 15 minutes to reach the same level of efficiency. 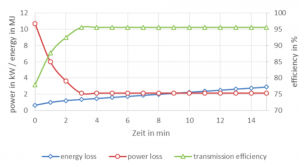 Research focus 3 deals with innovative technology to be integrated into housings of battery systems. Normally, battery housings are made of non-active materials like steel, aluminum or plastic. As the battery produces waste heat while being operated, battery systems need a cooling system. Normally, a water based cooling system is being used. During operation, the water picks up the energy produced by the battery and exchanges the heat in a special heat exchanger. Vice versa, during cold nights, the warm batteries are cooled down, as the batteries are losing heat over the battery housing. So, the idea behind the innovative battery housing is, that the heat conductivity of the entire housing can be controlled from outside. So, if well heat conduction is needed in order to support the cooling system, the heat conductivity will be switches to maximum. If the heat should be stored in order to keep the batteries warm during a longer period (overnight), the housing should be a good insulator in order to minimize the heat losses. To be sure, that such a system can really help to save energy and to improve the efficiency it is necessary to run several investigations including different seasons and driving cycles. During the first year of the project, a virtual model of a single cell was developed and also validated, which means that a virtual model was generated which behaves precisely like the real battery. With this model, an entire battery system can be built up. With this virtual battery system, all the necessary investigations will be performed during the next year of the project. An important parameter is the aging of the battery represented by single cells. Figure 5 shows the correlation of the aging by means of simulation with the virtual model compared to physical tests of the same cell in reality. 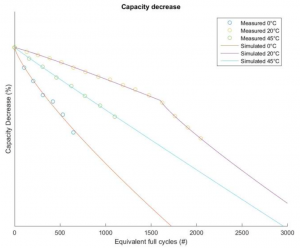 To sum up the activities of the first project year all work packages have worked together to define the central requirements architecture laying a stable and reliable base for the development activities in the second year of eMPROVE.